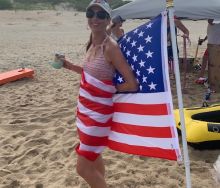 The people of Ocracoke love to celebrate their island. All year long they host fun, family-friendly events, and they welcome visitors to join them in their island-wide celebrations.

Decoy carvers and aficionados will again descend on Ocracoke for the Third Annual Ocracoke Waterfowl Festival.  The event is presented by the non-profit Ocracoke Island Decoy Carvers Guild, which formed in early 2018 to preserve this art form in Ocracoke history. The annual festival draws hundreds of attendees which include carvers and collectors from Ocracoke Island and the region. There will be a bake sale and canned drinks available.

Ocracoke’s 5K, 10K and 1-mile family fun run are held on Saturday and the Ocracoke Half Marathon is held on Sunday. The races take place in the Village of Ocracoke through historic roads, by Ocracoke Harbor and the lighthouse. All accommodations are within walking or biking distance to the start/finish line. Each participant receives a t-shirt and a finisher medal. The top three male and female contestants of each category receive an award.  Come experience a Run Fest weekend and have a great vacation at the same time. Sign up here.

The annual Ocracoke British Cemetery ceremony and reception commemorate the sinking of the H.M.T. Bedfordshire off the coast in 1942. Four sailors from the Bedfordshire are buried on Ocracoke, in a small plot of land that is “forever England.” Representatives from the US Coast Guard, US Navy, British Royal Navy and Canadian Royal Navy as well as Ocracoke High School students participate in the annual ceremony, which includes a reading of the crew list, the playing of bagpipes and a 21-gun salute. The event is open to all who wish to pay their respects, and it brings together family members and World War II historians from all over the world to honor these gravesites. Businesses, residents, and visitors are encouraged to make a donation to help support this event. Checks can be made payable to Ocracoke Preservation Society with “British Cemetery” in the memo line and mail to: OPS, Box 1240, Ocracoke, NC 27960.

For a good time, you can’t beat the Firemen’s Ball on Memorial Day weekend. A huge pig-pickin’ BBQ starts the event off right, with good food and drink for everyone. The silent auction allows people to win great prizes in a dignified manner, while the live auction encourages good-natured and exuberant bidding wars, all to support Ocracoke’s wonderful Volunteer Fire Department. The dancing goes late into the evening with three bands cranking out rock ‘n’ roll all night long. No fools, no fun!

The Ocrafolk Festival is three days of music and storytelling that takes place every year on the first full weekend in June. Ocrafolk is presented by Ocracoke Alive, and celebrates music, storytelling, and artisans from the NC coastal region and beyond. Enjoy live music and storytelling by local and regional bands. Wander the festival grounds and find delicious food options from island restaurants and an amazing selection of artisans’ booths showcasing fine arts and crafts

Ocracoke is a town that loves to dress up and put on a show. The Annual WOVV Women’s Arm Wrestling Tournament contestants never disappoint with their costumes and wrestler personas. This double-elimination tournament is as much about the spectacle as the strength, but the ladies will impress you with their powerful biceps and fierce determination. The winner gets a year’s worth of bragging rights! WOVV 90.1FM is Ocracoke’s own community-supported radio station.

There’s no lack of excitement on Ocracoke Island during Independence Day. The festivities kick off July 2 with a fireworks show over beautiful Silver Lake. The fun continues July 3 and 4 with activities each day including a Sand Sculpture Contest, a traditional hometown parade, a Square Dance and a Community Beach Bonfire.

Early August brings the annual Ocracoke Fig Festival. Local vendors provide fresh figs, fig preserves, local cookbooks, fig-smoked BBQ and other fig-tastic items. Learn about Ocracoke’s fig history and culture, and bring the kids for old-fashioned crafts and games. The showpiece of the Fig Festival is the Fig Cake Bake-Off. Everyone is welcome to submit a cake in one or both categories, Traditional or Innovative. A panel of judges chooses the winners. And the best part? Free samples for everyone after the contest! The fun continues with a traditional Ocracoke Square Dance, followed by dancing to the Ocracoke Rockers!

Enjoy listening to great bands, participate in live auctions and eat fresh Ocracoke seafood at this new benefit to support the Ocracoke Health Center. Tickets will be available at the door.

Chart your course to Ocracoke for the annual Blackbeard’s Pirate Jamboree. Come celebrate Ocracoke’s unique piratical heritage with a weekend of swashbuckling fun! The Jamboree features a historically accurate pirate encampment and a reenactment of the infamous pirate Blackbeard’s last battle at Ocracoke. Three ships will re-create the last hours of Blackbeard and his crew as Lt. Robert Maynard brings them to battle with cannons blazing. Get in touch with your inner pirate and wear your best buccaneer gear. Interactive living history exhibits, sea chanteys, music and a shopping marketplace of seafaring fine arts and wares provide entertainment for all ages. The event culminates when pirate and militia crews march to beautiful Springer’s Point to honor those killed in Blackbeard’s last battle with a eulogy, hymns and final cannon salute.

Ring in the holidays island-style with this seasonal parade that takes place on the waters that surround Ocracoke village. The Ocracoke Parade of Boats is a celebration of life on the water, and this annual procession of ships of all shapes and sizes is sure to make anyone fall in love with the coastal scene and community that calls Ocracoke Island home.

By far the most popular December event is the annual Ocracoke Working Watermen’s Association Oyster Roast & Shrimp Boil. Hundreds of eager seafood lovers line up at makeshift tables in the bright winter sunshine to shuck oysters, peel ‘n’ eat shrimp and slurp fish stew, washed down with cold beverages. Come out and eat your fill! Dessert is offered at the Ocracoke Working Watermen’s Exhibit in the Community Square.

About the Author Molly Harrison

Molly Harrison is managing editor at OneBoat, publisher of OuterBanksThisWeek.com. She moved to Nags Head in 1994 and since then has made her living writing articles and creating publications about the people, places and culture of the Outer Banks. When not working she practices and teaches yoga and spends as much time as possible outside and in or on the water with her husband and two children.