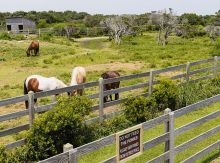 On the sound side of the island seven miles north of Ocracoke Village is a 188-acre plot of land. Behind a wooden fence lives the herd of Ocracoke Banker Ponies, descendants of Spanish mustangs who survived a shipwreck just offshore several hundred years ago. Due to the traffic on Highway 12 through Ocracoke, the Banker Ponies were penned in 1959 and have been cared for by the National Park Service ever since.

Legend has it that the “Banker” horses of Ocracoke were left here by shipwrecked explorers in the 16th or 17th century. European ships commonly carried livestock to the New World. If a ship ran aground near the coast, animals were thrown overboard to lighten the load so that the ship could be re-floated. The livestock were often left behind when the ship again set sail. Sir Richard Grenville’s ship Tiger ran aground at Ocracoke in 1585. There is speculation that he may have unloaded Spanish mustangs on the island.

Horses have been documented on Ocracoke since the first European settlers came to stay in the 1730s. There have been as many as 300 horses on Ocracoke. While small and powerful, they are full-grown horses that are often called or referred to as Banker ponies as their range included most of the Outer Banks. Physically, the Ocracoke ponies are different from other horses – they have a different number of vertebrae and ribs as well as a distinct shape, posture, color, size and weight that sets them apart from other horses.

The ponies have played a major role in the island’s history, serving residents as beasts of burden at work and play, in beach rides and races. When the early colonists settled Ocracoke, they used the ponies to help make life easier on the island by pulling carts to haul freight and fish. The U.S. Lifesaving Service used them for beach patrols and to haul equipment to shipwreck sites. The US Coast Guard kept a small band of Banker ponies to patrol the beaches in World War II. As time progressed, the families that lived on the island claimed the ponies, holding pony penning in the summer. Riders would start early in the morning at the north end of the island and drive the ponies into the village where holding pens had been constructed. Once in the pens they would sort out the ponies and brand the new ones. Some ponies would be broken for riding or sold, and the rest were turned loose to roam free again.

The ponies are not locked in their barns during severe weather, which allows them to roam around their pastures and take care of themselves and each other. But during severe weather events, the caretaker makes sure the ponies are fed and safe. The caretaker assesses any damages to the barns, fences, mangers, and utilities once the weather clears. She is also responsible for training the volunteers who feed the ponies, as well as general maintenance around the pasture and keeping an eye on the health of each pony.

A visit to the Pony Pen is a must for any traveler to Ocracoke. The ponies have a wide range of sound side beach and marsh to explore, but they prefer to hang around their paddocks and stables (especially near feeding time), so you can almost always spot a few.

Halfway between the Ocracoke Village and the north end of the island, you will see the brown NPS sign for the Pony Pen. There’s plenty of parking, a short walk alongside the pasture on a boardwalk, and an elevated viewing platform. Bring bug spray and a camera!

NPS staff and volunteers offer programs at the Pony Pen for visitors to learn more about the most popular island residents. You can help these unique ponies by symbolically adopting an Ocracoke pony. Monetary support helps pay for their ongoing care and feeding. Learn more about the Adopt A Pony program here.

Directly across the highway from the Pony Pens is a pedestrian beach access with a long boardwalk over the dunes. It is a popular spot for shelling.

About the Author Molly Harrison

Molly Harrison is managing editor at OneBoat, publisher of OuterBanksThisWeek.com. She moved to Nags Head in 1994 and since then has made her living writing articles and creating publications about the people, places and culture of the Outer Banks. When not working she practices and teaches yoga and spends as much time as possible outside and in or on the water with her husband and two children.