Social
Outer BanksOcracokeThings To DoThings to Do on Ocracoke: Birding
content_1035_1

Click here for the most current updates for Restaurants, Shops, Things to Do, Hotels, Events and Vacation Rentals.

Things to Do on Ocracoke: Birding

No matter what season you visit Ocracoke, you’re guaranteed to see a great variety of birds. The island is a haven for migrating waterfowl, shorebirds, songbirds, birds of prey and even the occasional pelagic bird, making birding a very satisfying thing to do on Ocracoke Island. Every once in a while a rare bird will blow off course and visit Ocracoke, like the snowy owl who brought birders from all along the East Coast one winter. Look to these locations for birding on Ocracoke Island.

Ocracoke’s beach has attracted increasing national attention as it worked its way up Dr. Beach’s acclaimed list of Best Beaches; he even named it America's #1 beach in 2007. The beach is wide and clean and there are plenty of spots where, with a little effort, you can enjoy it undisturbed by others. The ocean reaches high temperatures of 85 degrees F in the summer... END_OF_DOCUMENT_TOKEN_TO_BE_REPLACED

The first national seashore in the country, Cape Hatteras National Seashore stretches more than 70 miles along parts of three islands: Bodie Island (just south of Nags Head), Hatteras Island and Ocracoke Island. It is a place for recreation, immersion in nature and inspiration for humans as well as a safe haven for a variety of wildlife. The beautiful barrier island environment is a place... END_OF_DOCUMENT_TOKEN_TO_BE_REPLACED

Just across from the National Park Service’s Ocracoke Campground, Hammock Hills Nature Trail is a 3/4-mile trail through the island’s maritime forest and salt marsh. It’s a great trail for nature lovers and bird watchers, and there are informative signposts along the way. The hike takes about 30 minutes. Parking is available for several cars, or one can walk or bike there on the paved... END_OF_DOCUMENT_TOKEN_TO_BE_REPLACED

Portsmouth Island, just across the inlet from Ocracoke Island, is an enchanting place to visit. This uninhabited island is rugged and remote, one of the last Atlantic coast islands that is free of development, thanks to its status as part of the Cape Lookout National Seashore. There is much to do on this island, all of it free and simple, filled with history and the... END_OF_DOCUMENT_TOKEN_TO_BE_REPLACED

Springer’s Point covers about 90 acres of maritime forest bordering Pamlico Sound near South Point. In 2002 after 10 years of research and negotiation, the North Carolina Coastal Land Trust purchased a 31-acre tract of this land and established a nature preserve. A high point of land overlooking the inlet, Springer’s is believed to be the site of the earliest settlements on the island. Supposedly... END_OF_DOCUMENT_TOKEN_TO_BE_REPLACED 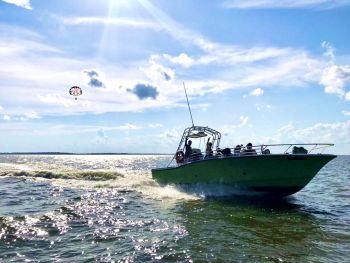